Covering over 300 championships worldwide, with an extensive archive dating back to 1997, Revcounter.Online will keep you up-to-date with the latest Championship Standings from International and National Motorsport Series on both 2 and 4 wheels.

Enter through the Directory  and follow the links to your favorite Motorsport category. 1 August : NASCAR Cup Series : Tyler Reddick holds on in overtime to win the Verizon 200 at Indianapolis Motor Speedway, taking his 2nd win of the season and the 2nd of his NASCAR Cup career. 1 August : FIA Formula One World Championship : World Champion Max Verstappen wins the Hungarian Grand Prix, his 8th win of the season and the 28th of his career.

1 August : Superbike World Championship : Alvaro Bautista and Toprak Razgatlioglu share the race wins at the Czech round of the series at Most.

1 August : IndyCar Series : Alexander Rossi wins the Gallagher Grand Prix on the Indianapolis Road Course, his 1st win in 3 years and the 8th of his career.
Will Power has re-taken the championship lead, 9 points ahead of Marcus Ericsson. 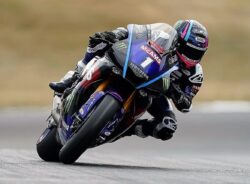 25 July : AMA 250 Pro Motocross : Jett Lawrence gets his 7th overall win in 2022 with 2-2 moto finishes at Washougal.
The Lawrence brothers continue to lead the series, with Jett 28 points clear of Hunter with 4 rounds remaining.

25 July : NASCAR Truck Series : The field has been set for this season’s championship “Playoff’s” with the top 10 drivers in points finalized after the latest round at Pocono, won by Chandler Smith. 24 July : IndyCar Series : Josef Newgarden dominates race 1 of the doubleheader weekend at Iowa, the Hy-VeeDeals.com 250. The win was Newgardens 4th of the season. Pato O’Ward and Will Power finish 2nd and 3rd. 18 July : NASCAR Cup Series : Christopher Bell wins at New Hampshire and becomes the 14th driver to qualify for the 16-driver NASCAR Playoffs. The win is the 2nd for Bell in the Cup Series

18 July : Superbike World Championship : World Champion Toprak Razgatlioglu has won all 3 races at Donington Park, round 5 of the series.
Ducati’s Alvaro Bautista continues to lead the series, 17 points ahead of Jonathan Rea. 18 July : AMA 250 Pro Motocross : Jett Lawrence gets his 6th overall round win with 1-1 moto finishes at Spring Creek, extends his points lead to 27 over brother Hunter.

11 July : NASCAR Cup Series : Chase Elliott won the Quaker State 400 at Atlanta Motor Speedway on Sunday, joining his father Bill as the only Georgia-born drivers to win at the speedway. The win is Elliot’s 3rd in 2022. 11 July : FIA Formula One World Championship : Charles Leclerc wins the Austrian Grand Prix for Ferrari. The win is the 5th of Leclerc’s career. Max Verstappen finishes 2nd and continues to lead the championship.